Most kids my age are upset the moment something good is over, something fun is done. This is normal, and I felt like this for a while after anything that I enjoyed. But I finally realized one day that I shouldn’t be sad because the experience is over- I should be happy because it happened, and I experienced it. Before I saw Hamilton: The Musical, I thought I might be sad afterwards, that I’d be disappointed that it had ended. This is the story of the day I learned this lesson.

Hamilton: The Musical. The name of the Broadway musical that’s flying around the world, inciting a craze in most who hear it. It is primarily composed of hip-hop and rap music and lyrics, a huge difference in the world of musicals. It was created by Lin-Manuel Miranda, and was open to the public in 2015. Also my favorite musical, and one of my latest obsessions. It’s been in my mind for about a year now, and the vision of actually seeing the musical in theater was once a far-off dream. However, in the fall of 2016, my family got in line on the Hamilton website to get tickets to the San Francisco Orpheum Theater’s show of Hamilton.

Months later- May 24th, 2017. I bounced up and down in my seat as I flipped through the Hamilton book. The car music – the Beatles – was low, but I was still singing along. I took pictures of the sky and the bridges we crossed- but not once during the car ride did it truly set in that I was going to see Hamilton.

The theater was in sight in what seemed like a flash. The Hamilton sign hung above the doors, and my heart started racing. Hamilton. Hamilton. It kept repeating in my mind, until it was a scream- I didn’t realize it up until then. The blood rushed to my head. As we walked up to the doors, I realized how hard it was to skip in high-heels, because that was what I was doing, in my eagerness to get to the theater… I was shaking, and beyond excited.

I was content to stay in the theater room until it began, but thankfully my dad wasn’t quite as struck by being in front of the stage as I was, and dragged me out to the booth. The lights flickered once, signaling the musical would soon begin, but I couldn’t express my irritation to my dad across the noise and across lines. I bounced on my heels, watching the line get shorter and shorter ahead of me. I was shaking as we brought the bag back to our seats, just as the lights flickered the second time. We sat down, and the lights ceased to glow above us. Cheering rang out, drowning out even my loudly beating heart. The first notes of the first song began to play, and my breathing nearly stopped as I soundlessly mouthed along to the lyrics, a slow grin crawling across my face. I felt like I was in a daze as I watched the first three songs fly by, flawlessly and quicker than I thought humanly possible. What would normally take twelve and a half minutes seemed to pass by in less than five.

I finally realized that I hadn’t blinked more than three times at intermission- at least, it felt like it. Images were still whirling in my head, and adrenaline pumping through my veins as my hands shook uncontrollably. I was there- I was watching Hamilton, what I had wanted to see for a year now! I could feel that my eyes were glazed over in wonder as I just stared at the empty stage. I searched through my memories of reading Hamilton: A Revolution – written by the musical’s creators about the musical – to find and laugh about all the secret meanings behind the lyrics. There were so many things that no one would know about Hamilton unless they saw it- so many little inflections in voice, or actions, or lighting. All this passed through my mind in those fifteen minutes of intermission, and when everyone finally had sat back down, I leaned forward, smiling widely, ready to watch. 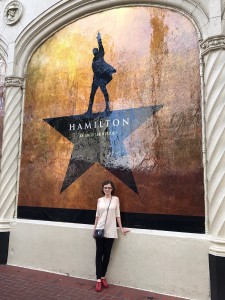 The rest of Act II was a mix between laughter and trying to not cry, and as the lights switched back on at the end of the performance, and the roaring of hands clapping sounded through the theater for at least five minutes. I caught my breath and leaned back in awe as the theater buzzed around us. We stood up, and my parents and I tried to weave our way through the floods of people going up stairs and out the doors, to the backstage door- where some of the actors would be exiting for signing merchandise.

We were some of the first there, granting me a spot in the outside corner of the fence that kept the fans from the stage door and the actors. My mom stood across from me, my dad behind me. The program we had bought flipped to different pages as I waited excitedly, as more crowds flooded in. I met the actors for multiple different roles, including Eliza, King George III (my personal favorite), Hamilton, and Hercules Mulligan/James Madison. I was in a daze afterwards, with a program in my hands freshly displaying multiple signatures from some of the actors.

We got in the car, and talked a bit- or, my parents did, and I sat in stunned silence. I was still grinning as my mind continued to replay all that had happened that day. My dad put on the audiobook, and we listened to the notes on each song. We went to dinner and I finally began talking. “How was it, what was your favorite part?” I nearly forgot to eat. 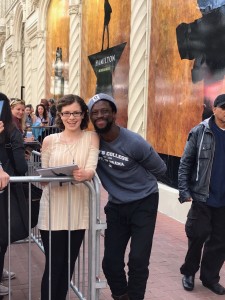 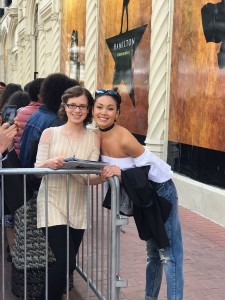 And just a few minutes after dinner ended, I realized something- unlike what I had thought before, I wasn’t sad that Hamilton was over, and that I’d likely not see Hamilton again in the near future. While I was anticipating that feeling before the musical even began, I realized later that I was just happy that I had seen it- something I had wanted to do for nearly a year! The memories will stick with me for my life, and the experience is also something I will never forget.